How big does a Bowhead whale get? Here is an overview over the average adult age: 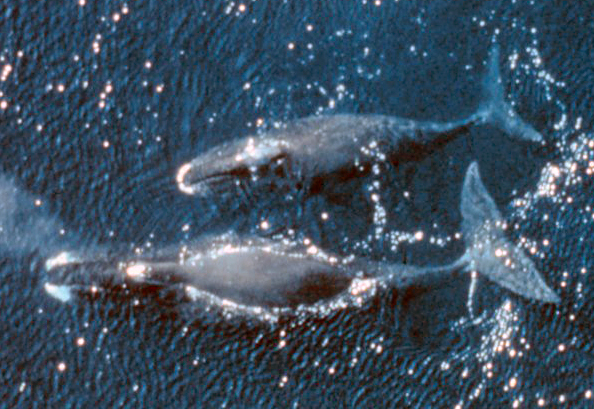 The bowhead whale (Balaena mysticetus) is a species of baleen whale belonging to the family Balaenidae and the only living representative of the genus Balaena. The bowhead is the only baleen whale endemic to the Arctic and subarctic waters. The species is named after its characteristic massive triangular skull, which is used to break through Arctic ice. Other common names of the species are the Greenland right whale or Arctic whale. American whalemen called them the steeple-top, polar whale, or Russia or Russian whale.The bowhead has the largest mouth of any animal representing almost one-third of the length of the body, the longest baleen plates with a maximum length of 4 m (13.1 ft) and may be the longest-lived mammal, with the ability to reach an age of more than 200 years.The bowhead was an early whaling target. The population was severely reduced before a 1966 moratorium was passed to protect the species. Of the five stocks of bowhead populations, three are listed as “endangered”, one as “vulnerable”, and one as “lower risk, conservation dependent” according to the IUCN Red List. The global population is assessed as of least concern.

Animals of the same family as a Bowhead whale

We found other animals of the Balaenidae family:

Animals with the same size as a Bowhead whale

Not that size really matters, but it makes things comparable. So here are a couple of animals that are as big as Bowhead whale:

Animals with the same litter size as a Bowhead whale

Here is a list of animals that have the same number of babies per litter (1) as a Bowhead whale:

Animals with the same life expectancy as a Bowhead whale

Completely different animals, but becoming as old as a Bowhead whale: