If you ever wondered how many inhabitants Belle Glade in Florida has, here is the answer:

Belle Glade, Florida has a population of 17,467 residents. 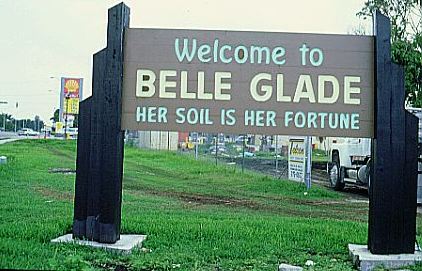 Belle Glade is a city in Palm Beach County, Florida, United States, on the southeastern shore of Lake Okeechobee. According to the 2010 U.S. Census, the city had a population of 17,467.Belle Glade (and the surrounding area) is sometimes referred to as “Muck City” due to the large quantity of muck, in which sugarcane grows, found in the area. Despite being located in the South Florida region of the state, Belle Glade is culturally more associated with the Florida Heartland.For a time during the early to mid 1980s, the city had the highest rate of AIDS infection per capita (37 cases in a population of roughly 19,000) in the United States. According to the FBI, in 2003, the city had the second highest violent crime rate in the country at 298 per 10,000 residents. In 2010, the Palm Beach County sheriff’s office estimated that half of the young men in Belle Glade between the ages of 18 and 25 had felony convictions. Some families have recently resorted to catching rainwater to survive because their utilities have been cut off for nonpayment.

Cities with a similar population size as Belle Glade

Cities with a similar size as Belle Glade

If you want to check which cities have a similar size as Belle Glade, Florida, here you go:

Cities with a similar population density as Belle Glade

Other cities that have a similar population density as Belle Glade, Florida are: