How big does a Caracal get? Here is an overview over the average adult age: 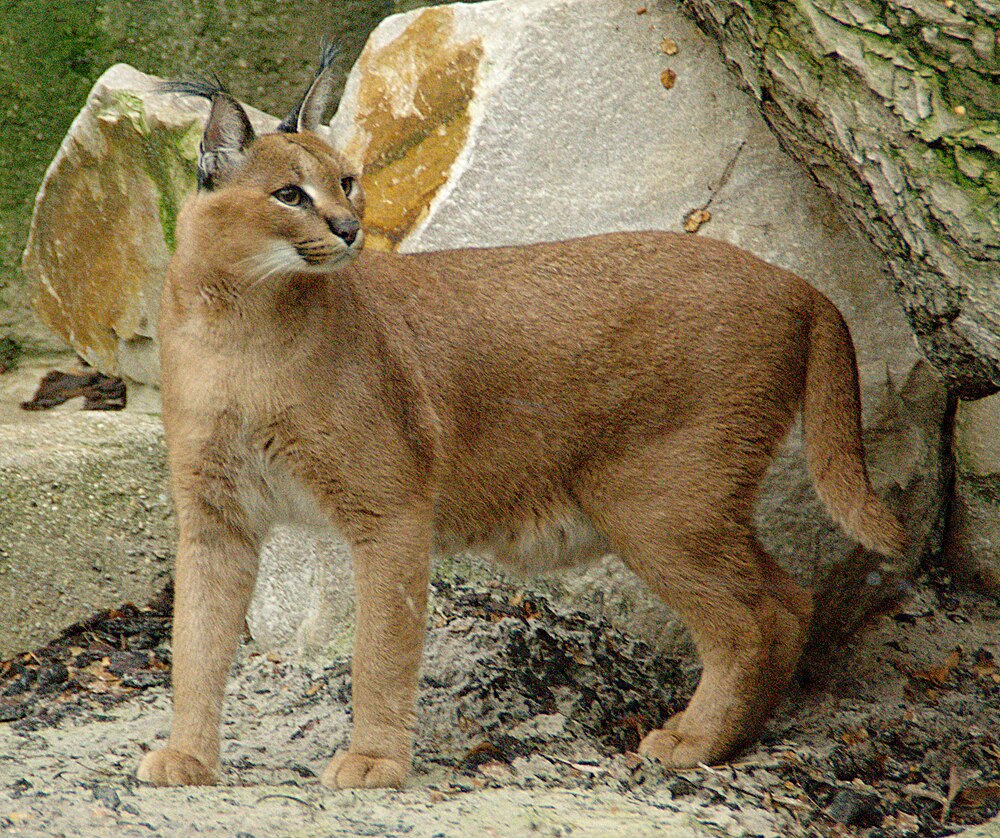 The caracal (Caracal caracal) is a medium-sized wild cat native to Africa, the Middle East, Central Asia and India. It is characterised by a robust build, long legs, a short face, long tufted ears, and long canine teeth. Its coat is uniformly reddish tan or sandy, while the ventral parts are lighter with small reddish markings. It reaches 40–50 cm (16–20 in) at the shoulder and weighs 8–18 kg (18–40 lb). It was first scientifically described by German naturalist Johann Christian Daniel von Schreber in 1776. Three subspecies are recognised since 2017.Typically nocturnal, the caracal is highly secretive and difficult to observe. It is territorial, and lives mainly alone or in pairs. The caracal is a carnivore that typically preys upon small mammals, birds, and rodents. It can leap higher than 4 m (12 ft) and catch birds in midair. It stalks its prey until it is within 5 m (16 ft) of it, after which it runs it down and kills its prey with a bite to the throat or to the back of the neck. Both sexes become sexually mature by the time they are one year old and breed throughout the year. Gestation lasts between two and three months, resulting in a litter of one to six kittens. Juveniles leave their mothers at the age of nine to ten months, though a few females stay back with their mothers. The average lifespan of captive caracals is nearly 16 years.Caracals have been tamed and used for hunting since the time of ancient Egypt.

Animals of the same family as a Caracal

Animals with the same size as a Caracal

Not that size really matters, but it makes things comparable. So here are a couple of animals that are as big as Caracal:

Animals with the same litter size as a Caracal

Here is a list of animals that have the same number of babies per litter (2) as a Caracal:

Animals with the same life expectancy as a Caracal

Completely different animals, but becoming as old as a Caracal:

Animals with the same weight as a Caracal

As a comparison, here are some other animals that weight as much as the Caracal caracal: