What is the maximal age a Ross seal reaches?

An adult Ross seal (Ommatophoca rossii) usually gets as old as 21 years. 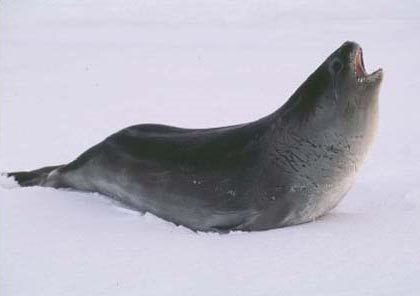 The Ross seal (Ommatophoca rossii) is a true seal (family Phocidae) with a range confined entirely to the pack ice of Antarctica. It is the only species of the genus Ommatophoca. First described during the Ross expedition in 1841, it is the smallest, least abundant and least well known of the Antarctic pinnipeds. Its distinctive features include disproportionately large eyes, whence its scientific name (Ommato- meaning “eye”, and phoca meaning “seal”), and complex, trilling and siren-like vocalizations. Ross seals are brachycephalic, as they have a short broad muzzle and have the shortest fur of any other seal.

Animals of the same family as a Ross seal

Animals that reach the same age as Ross seal

With an average age of 21 years, Ross seal are in good companionship of the following animals:

Weighting as much as Ross seal

Animals as big as a Ross seal

Those animals grow as big as a Ross seal: