How big does a Pygmy rabbit get? Here is an overview over the average adult age:

When born, they have an average size of 0 cm (0′ 0″). A full-grown exemplary reaches roughly 437 grams (0.96 lbs). Talking about reproduction, Pygmy rabbits have 5 babies about 1 times per year. The Pygmy rabbit (genus: Brachylagus) is a member of the family Leporidae. 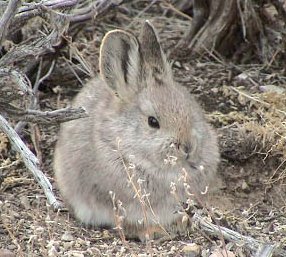 The pygmy rabbit (Brachylagus idahoensis) is a North American rabbit, and is one of only two rabbit species in America to dig its own burrow. The pygmy rabbit differs significantly from species within either the Lepus (hare) or Sylvilagus (cottontail) genera and is generally considered to be within the monotypic genus Brachylagus. One isolated population, the Columbia Basin pygmy rabbit, is listed as an endangered species by the U.S. Federal government, though the International Union for Conservation of Nature lists the species as lower risk.The pygmy rabbit is the world’s smallest leporid, which means adult weights from 375 to about 500 grams (0.827 to about 1.102 lb), and a body length from 23.5 to 29.5 centimeters (9.3 to 11.6 in); females are slightly larger than males. The pygmy rabbit is distinguishable from other leporids by its small size, short ears, gray color, small hind legs, and lack of whit fuzzy fur

Animals of the same family as a Pygmy rabbit

Animals with the same size as a Pygmy rabbit

Not that size really matters, but it makes things comparable. So here are a couple of animals that are as big as Pygmy rabbit:

Animals with the same litter size as a Pygmy rabbit

Here is a list of animals that have the same number of babies per litter (5) as a Pygmy rabbit:

Animals with the same weight as a Pygmy rabbit

As a comparison, here are some other animals that weight as much as the Brachylagus idahoensis: