How many baby Meadow voles are in a litter?

A Meadow vole (Microtus pennsylvanicus) usually gives birth to around 5 babies.With 2 litters per year, that sums up to a yearly offspring of 10 babies. 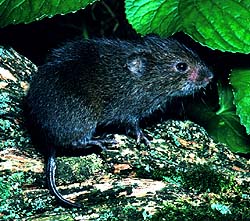 The meadow vole (Microtus pennsylvanicus), sometimes called the field mouse or meadow mouse, is a North American vole found across Canada, Alaska and the northern United States. Its range extends farther south along the Atlantic coast. One subspecies, the Florida salt marsh vole (M. p. dukecampbelli), is found in Florida, and is classified as endangered. Previously it was also found in Chihuahua, Mexico, but has not been recorded since 1998.The meadow vole is active year-round, usually at night. It also digs burrows, where it stores food for the winter and females give birth to their young. Although these animals tend to live close together, they are aggressive towards one another. This is particularly evident in males during the breeding season. They can cause damage to fruit trees, garden plants, and commercial grain crops.

Meadow vole is a member of the Muridae, as are these animals:

Animals that share a litter size with Meadow vole

Animals that get as old as a Meadow vole

Other animals that usually reach the age of 0.92 years:

Animals with the same weight as a Meadow vole

Animals with the same size as a Meadow vole