How many baby Taiga voles are in a litter?

A Taiga vole (Microtus xanthognathus) usually gives birth to around 8 babies.With 2 litters per year, that sums up to a yearly offspring of 16 babies. 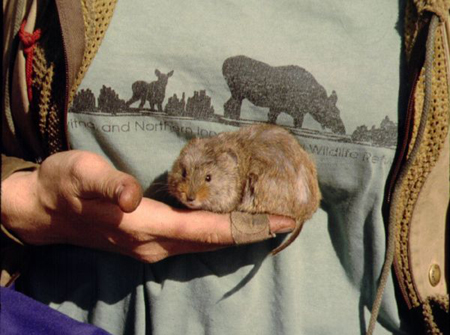 The taiga vole (Microtus xanthognathus) is a large vole found in northwestern North America, including Alaska and northwestern Canada. The name “taiga vole” comes from its living in the boreal taiga zone. It is also sometimes called the yellow-cheeked vole or chestnut-cheeked vole because of the rusty-yellow color on its face around its vibrisae (whiskers); The taiga voles derive their name from these features: “xantho” is Greek for yellow and “gnathus” is Greek for jaw. It is typically much larger than most other North American voles, especially those from the genus Microtus.An adult taiga vole, excluding tail length, usually ranges from 186–226 mm (7.3–8.9 in) in length and usually weighs 140–170 g (4.9–6.0 oz).This species is found in northern forests near water or bogs. It makes runways through the surface growth and burrows. It is usually found in colonies. It feeds on grasses, lichens, horsetails and berries. It stores food in its burrows for the winter. Like the singing vole, this animal may give a warning call to alert other members of the colony of danger.The female vole has litters of 7 to 10 young. The vole population in a given area can vary greatly from year to year.They are active year-round, usually during dark periods.Although not commonly encountered, they can be locally abundant.The taiga vole is from the order Rodentia and the family Muridae.

Taiga vole is a member of the Muridae, as are these animals:

Animals that share a litter size with Taiga vole

Those animals also give birth to 8 babies at once:

Animals with the same weight as a Taiga vole

Animals with the same size as a Taiga vole