What is the maximal age a Blue wildebeest reaches?

An adult Blue wildebeest (Connochaetes taurinus) usually gets as old as 21.5 years. 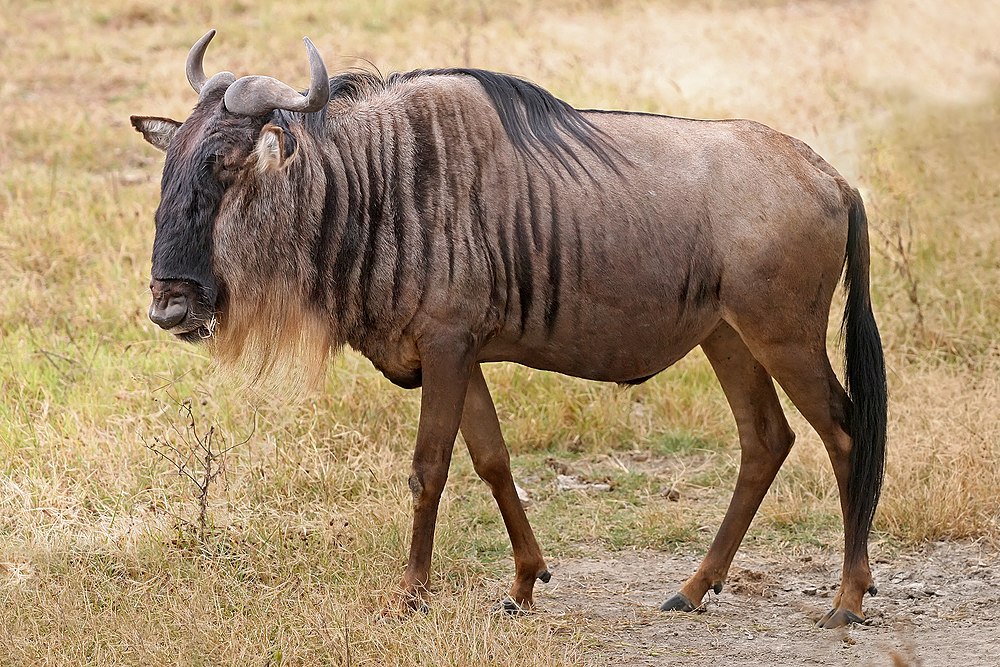 The blue wildebeest (Connochaetes taurinus), also called the common wildebeest, white-bearded wildebeest, or brindled gnu, is a large antelope and one of the two species of wildebeest. It is placed in the genus Connochaetes and family Bovidae, and has a close taxonomic relationship with the black wildebeest. The blue wildebeest is known to have five subspecies. This broad-shouldered antelope has a muscular, front-heavy appearance, with a distinctive, robust muzzle. Young blue wildebeest are born tawny brown, and begin to take on their adult coloration at the age of 2 months. The adults’ hues range from a deep slate or bluish-gray to light gray or even grayish-brown. Both sexes possess a pair of large curved horns.The blue wildebeest is a herbivore, feeding primarily on short grasses. It forms herds which move about in loose aggregations, the animals being fast runners and extremely wary. The mating season begins at the end of the rainy season and a single calf is usually born after a gestational period of about 8.5 months. The calf remains with its mother for 8 months, after which it joins a juvenile herd. Blue wildebeest are found in short-grass plains bordering bush-covered acacia savannas in southern and eastern Africa, thriving in areas that are neither too wet nor too arid. Three African populations of blue wildebeest take part in a long-distance migration, timed to coincide with the annual pattern of rainfall and grass growth on the volcanic soil short-grass plains where they can find the nutrient-rich forage necessary for lactation and calf growth.The blue wildebeest is native to Angola, Botswana, Kenya, Mozambique, South Africa, Swaziland, Tanzania, Zambia, and Zimbabwe. Today, it is extinct in Malawi, but has been successfully reintroduced in Namibia. The southern limit of the blue wildebeest range is the Orange River, while the western limit is bounded by Lake Victoria and Mount Kenya. The blue wildebeest is widespread and is being introduced into private game farms, reserves and conservancies. So, the International Union for Conservation of Nature and Natural Resources rates the blue wildebeest as being of least concern. The population has been estimated to be around 1.5 million, and the population trend is stable.

Animals of the same family as a Blue wildebeest

Animals that reach the same age as Blue wildebeest

With an average age of 21.5 years, Blue wildebeest are in good companionship of the following animals:

Animals with the same number of babies Blue wildebeest

Weighting as much as Blue wildebeest

Animals as big as a Blue wildebeest

Those animals grow as big as a Blue wildebeest: