What is the maximal age a Lesser kudu reaches?

An adult Lesser kudu (Tragelaphus imberbis) usually gets as old as 18.92 years. 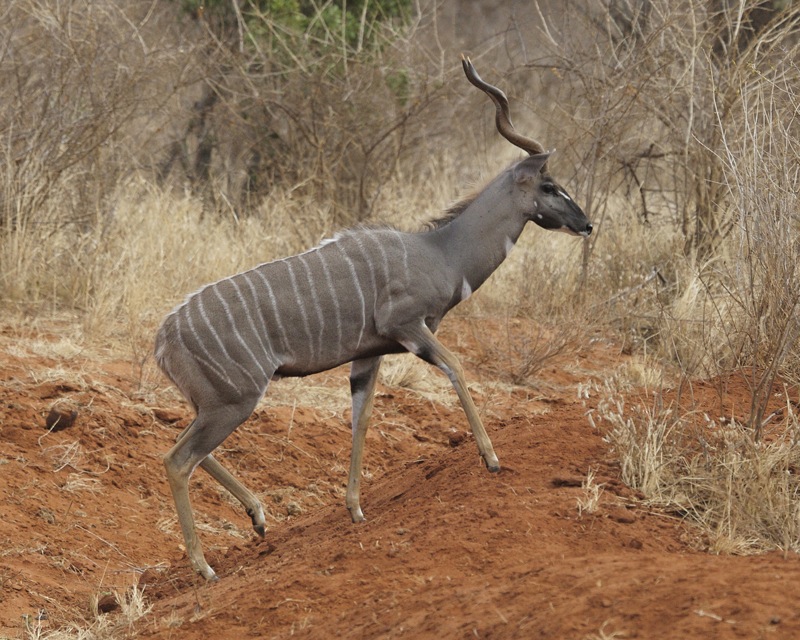 The lesser kudu (Tragelaphus imberbis) is a forest antelope found in East Africa. It is placed in the genus Tragelaphus and family Bovidae. It was first described by the English zoologist Edward Blyth in 1869. The head-and-body length is typically 110–140 cm (43–55 in). Males reach about 95–105 cm (37–41 in) at the shoulder, while females reach 90–100 cm (35–39 in). Males typically weigh 92–108 kg (203–238 lb) and females 56–70 kg (123–154 lb). The females and juveniles have a reddish-brown coat, while the males become yellowish grey or darker after the age of 2 years. Horns are present only on males. The spiral horns are 50–70 cm (20–28 in) long, and have two to two-and-a-half twists.A pure browser, the lesser kudu feeds on foliage from bushes and trees (shoots, twigs) and herbs. Despite seasonal and local variations, foliage from trees and shrubs constitute 60–80% of the diet throughout the year. The lesser kudu is mainly active at night and during the dawn, and seeks shelter in dense thickets just after the sunrise. The lesser kudu exhibits no territorial behaviour, and fights are rare. While females are gregarious, adult males prefer being solitary. No fixed breeding season is seen; births may occur at any time of the year. The lesser kudu inhabits dry, flat, and heavily forested regions.The lesser kudu is native to Ethiopia, Kenya, Somalia, South Sudan, Tanzania, and Uganda, but it is extinct in Djibouti. It may have been present in Saudi Arabia and Yemen as recently as 1967, though its presence in the Arabian Peninsula is still controversial. The total population of the lesser kudu has been estimated to be nearly 118,000, with a decreasing trend in populations. One-third of the populations survive in protected areas. Presently, the International Union for Conservation of Nature rates the lesser kudu as “near threatened”.

Animals of the same family as a Lesser kudu

Animals that reach the same age as Lesser kudu

With an average age of 18.92 years, Lesser kudu are in good companionship of the following animals:

Animals with the same number of babies Lesser kudu

Weighting as much as Lesser kudu

Animals as big as a Lesser kudu

Those animals grow as big as a Lesser kudu: