How many baby Black rats are in a litter?

A Black rat (Rattus rattus) usually gives birth to around 5 babies.With 3 litters per year, that sums up to a yearly offspring of 15 babies. 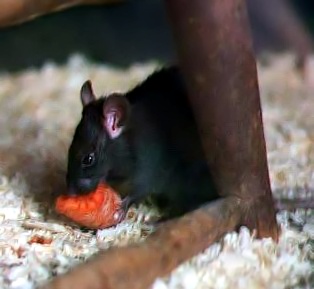 The black rat (Rattus rattus), also known as ship rat, roof rat, or house rat—is a common long-tailed rodent of the stereotypical rat genus Rattus, in the subfamily Murinae.The black rat is black to light brown in colour with a lighter underside. It is a generalist omnivore and a serious pest to farmers because it feeds on a wide range of agricultural crops. It is sometimes kept as a pet. In parts of India, it is considered sacred and respected in the Karni Mata Temple in Deshnoke.

Black rat is a member of the Muridae, as are these animals:

Animals that share a litter size with Black rat

Animals that get as old as a Black rat

Other animals that usually reach the age of 4.17 years:

Animals with the same weight as a Black rat

Animals with the same size as a Black rat