How many baby Giant golden-crowned flying foxs are in a litter?

A Giant golden-crowned flying fox (Acerodon jubatus) usually gives birth to around 1 babies.With 1 litters per year, that sums up to a yearly offspring of 1 babies.

Upon birth, they weight 13 grams (0.03 lbs). They are a member of the Pteropodidae family (genus: Acerodon). 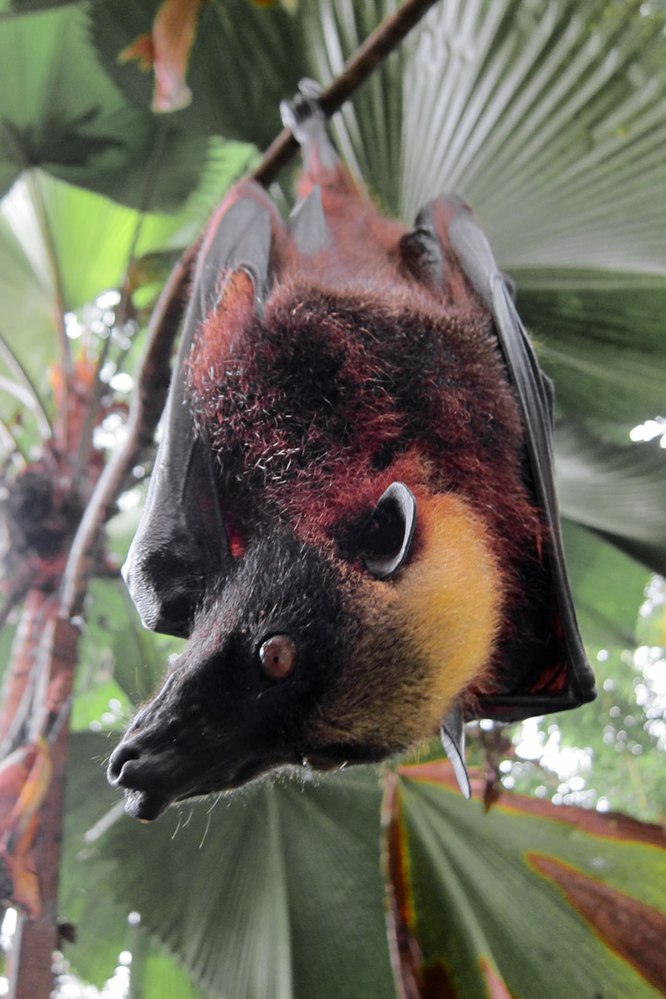 The giant golden-crowned flying fox (Acerodon jubatus), also known as the golden-capped fruit bat, is a species of megabat endemic to the Philippines. Since its description in 1831, three subspecies of the giant golden-crowned flying fox have been recognized, one of which is extinct. The extinct subspecies (A. jubatus lucifer) was formerly recognized as a full species, the Panay golden-crowned flying fox. Formerly, this species was placed in the genus Pteropus; while it is no longer within the genus, it has many physical similarities to Pteropus megabats. It is one of the largest bat species in the world, weighing up to 1.4 kg (3.1 lb)—only the Indian and great flying fox can weigh more. It has the longest documented forearm length of any bat species at 215 mm (8.5 in).It is primarily frugivorous, consuming several kinds of fig. However, its diet also includes some leaves. It forages at night and sleeps during the day in tree roosts. These roosts can consist of thousands of individuals, often including another species, the large flying fox. Not much is known about its reproduction; it gives birth annually from April through June, with females having one pup at a time. Predators of the giant golden-crowned flying fox include raptors such as eagles, the reticulated python, and humans.Owing to deforestation and poaching for bushmeat, it is an endangered species. Though national and international law makes hunting and trade of this species illegal, these regulations are inadequately enforced, meaning that the species is frequently hunted nonetheless. Even in roosts that are more stringently protected from poaching, it is still affected by human disturbance via tourists who intentionally disturb them during the day.

Other animals of the family Pteropodidae

Giant golden-crowned flying fox is a member of the Pteropodidae, as are these animals: