How many baby Lowland pacas are in a litter?

A Lowland paca (Agouti paca) usually gives birth to around 1 babies.With 1 litters per year, that sums up to a yearly offspring of 1 babies. 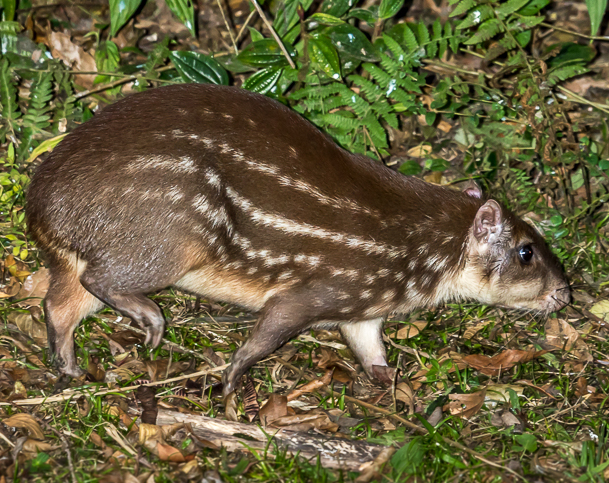 The lowland paca (Cuniculus paca), also known as the spotted paca, is a large rodent found in tropical and sub-tropical America, from East-Central Mexico to Northern Argentina. Introduced to Cuba, Bahamas, Trinidad, Jamaica and Hispaniola.The animal is called paca in most of its range, but tepezcuintle (original Aztec language name) in most of Mexico and Central America, guardatinaja in Nicaragua, pisquinte in northern Costa Rica, jaleb in the Yucatán peninsula, conejo pintado in Panama, guanta in Ecuador, majás or picuro in Peru, jochi pintado in Bolivia, and boruga, tinajo, or guartinaja in Colombia. It is also known as the gibnut in Belize, where it is prized as a game animal, labba in Guyana, lapa in Venezuela, and lappe on the island of Trinidad. Although lowland pacas are not in danger of being extinct, local extinctions have occurred due to habitat destructions.There is much confusion in the nomenclature of this and related species; see agouti. In particular, the popular term agouti or common agouti normally refers to species of the distinct genus Dasyprocta (such as the Central American agouti, Dasyprocta punctata). Sometimes the word agouti is also used for a polyphyletic grouping uniting the families Cuniculidae and Dasyproctidae, which, besides the pacas and common agoutis, includes also the acouchis (Myoprocta). Cuniculus is the appropriate genus name instead of Agouti based on a 1998 ruling of the International Commission on Zoological Nomenclature as the lowland paca’s genus.

Other animals of the family Agoutidae

Lowland paca is a member of the Agoutidae, as are these animals:

Animals that share a litter size with Lowland paca

Animals that get as old as a Lowland paca

Other animals that usually reach the age of 16 years:

Animals with the same weight as a Lowland paca

Animals with the same size as a Lowland paca