It is hard to guess what a Mitchell’s hopping mouse weights. But we have the answer: 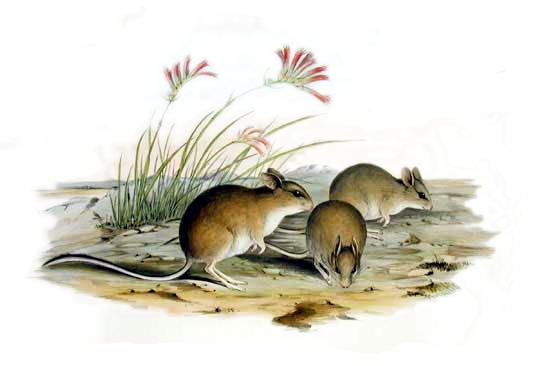 Mitchell’s hopping mouse (Notomys mitchellii) is the largest extant member of the genus Notomys, weighing between 40 and 60 g (1.4 and 2.1 oz). N. mitchellii is a bipedal rodent with large back legs, similar to a jerboa or kangaroo rat. The species occurs throughout much of semi-arid Southern Australia, and appears to be particularly common on the Eyre Peninsula, South Australia. Typical habitat for N. mitchellii appears to be mallee shrublands on sandy dune systems. The species is currently considered to be unthreatened, but its range has been reduced through habitat disturbance and destruction associated with European settlement in Australia.Individuals are a sandy grey colour, with white chest hairs and a paler underbelly. The tail of the species is long and has the characteristic hopping mouse brush at the tip. This tail morphology is thought to aid balance when travelling at speed. Being nocturnal, Notomys mitchellii shelters during the day in typical hopping mouse burrows; a small number of interconnected, vertical shafts, burrowing deep into the dune. Up to eight animals, different ages and sex, have been found in a single burrow.N. mitchellii is known to have a lifespan of up to five years in the laboratory and this is thought to be a strategy evolved to combat the breeding-constraints of lengthy periods of drought. It has also been found that this species is less able to cope with water deprivation than other species of the genus. Notomys mitchellii produces concentrated urine to conserve water, but in a different way to more arid-dwelling rodents. The diet of N. mitchellii is also thought to consist of more roots and green matter than that of other species of the genus: animals captured in drought conditions had stomach contents consisting of some 85% roots, 11% green leaf and 4% seed.

Animals of the same family as a Mitchell’s hopping mouse

Animals with the same weight as a Mitchell’s hopping mouse

As a comparison, here are some other animals that weight as much as the Notomys mitchellii:

Animals with the same size as a Mitchell’s hopping mouse

Not that size really matters, but it makes things comparable. So here are a couple of animals that are as big as Mitchell’s hopping mouse:

Here is a list of animals that have the same number of babies per litter (3) as a Mitchell’s hopping mouse: